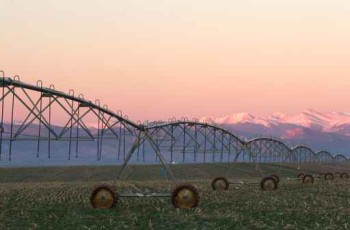 In 2009, Charles Corey, Farm Director for the Irrigation Research Foundation (IRF) in Yuma, Colorado, came together with a research team from Lee Rain for a multi-year study of precision deficit irrigation in corn production. The principle objectives of the study? To discover if analytical plant-triggered irrigation and monitoring of corn crops can improve present day watering regimes and practices and if so, by how much.

For Lee Rain, the study represented a critical test of the firm’s patented Adviroguard™ software, an agricultural data analysis program designed to identify and guide the implementation of improved operational efficiencies. The conventional amount of irrigation water applied in the Yuma region is estimated to be 22.4 acre inches of water (608,815 gallons of water) per acre or more than 76 million gallons of water per pivot. Using a fully automated irrigation system which employed soil profile analysis to trigger irrigation events to meet the corn plants’ precise needs, the team measured water use efficiencies comparing water applied and consumed to that of yield performance.

The science of plant-triggered irrigation is one of the ways
Lee Rain is empowering growers to succeed and thrive today and tomorrow.

DISCOVERIES
The data from the IRF study provided compelling evidence for the effectiveness of plant-triggered precision irrigation while also revealing some critical deficiencies of traditional irrigation methods. The discovery that the most active root zone in this region is within the top 12 inches of the soil profile indicated that conventional irrigation can force water and nutrients to migrate below the active zone and hinder the plant’s performance. Overwatering can rob the crop of both oxygen and fertilizer. The study demonstrated that plant-triggered irrigation requires significantly less water to grow a corn crop than previously believed—49% less water. An automated plant-triggered irrigation system could effectively identify the critical factors for optimal plant growth: precisely when and how much water to apply.

GROWING FOR TOMORROW
Lee Rain is dedicated to assisting agricultural producers throughout the country in realizing the full potential of their abilities: profitability, sustainability,
manageability, and accountability. To that end, Lee Rain is using innovative analytical tools like Adviroguard™ Analytical Software and discoveries from studies like this one to create Ag Management Strategies, customized action plans that turn data from the field into a clear path to improved performance. The science of plant-controlled irrigation is one of the ways Lee Rain is empowering growers to succeed and thrive today and tomorrow.